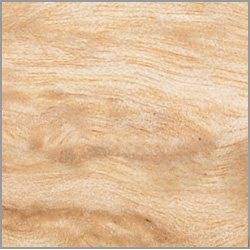 Curly birch is a type of wood used in knife manufacture to make handle scales. The light gray to light brown wood is very dense and hard and has a strong dark brown pattern.

The curly birch is indigenous to the very north of Europe. Outside of Scandinavia, it also grows in Finland and north-west Russia. From north to south, the tree's geographic range reaches from the North Cape to Hardangervidda, a plateau in southern Norway. Like all birch species, curly birches are frugal and thrive in the region's harsh climate and nutrient-poor soil. Curly birches are a short species, usually growing just one to two meters tall. The low growth of the curly birch is very favorable for making knife handles.

The species doesn't just have a height-restricted growth – the trunk also grows just a few millimeters every year. The trunk of a fully mature tree is usually no wider than about 10 to 20 centimeters in diameter. This means that the annual rings of the trunk wood are very close together. Thus, the wood of the curly birch has a low water content and higher wood fiber content than the wood of other birch species from regions with a milder climate and richer soil. It is particularly strong and dense.

Curly birch wood is easy to process – and knife handles made from this material often last several generations. In the native region of this wood, in Northern Europe, it has been common knowledge for centuries that the dense and firm wood of the curly birch is very well suited for making handle scales. Therefore, the wood is considered the classic choice for knife handles.

Since the late 18th century, curly birch wood has also been used in the manufacture of furniture. Among the entire population of curly birches, patterned trunks are very rare. Therefore, some countries in the main dispersal area (such as Finland) protect the species with a logging quota.