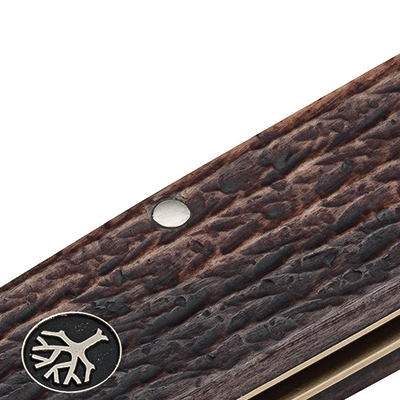 For millennia, animal bones have been used to make knife handles. Today, the most commonly used varieties are cattle and reindeer bones.

Since ancient times, animal bones have been used to make tools and jewelry as well as art and religious artefacts. Early historic research has shown that even Homo erectus, the first upright ancestor of Homo sapiens, made tools from animal bones several hundred thousand years ago. The earliest bone carvings made by Homo sapiens are more than 30,000 years old and were created out of mammoth ivory. One major reason for the use of animal bones to make tools and other objects was that suitable wood wasn\'t always available everywhere. During the ice age, for instance, wood was scarce in Central Europe, meaning that animal bones became an important resource. In the Middle Ages, animal bones were still used in Europe to make tools and other things, being replaced only gradually in the modern era.

In regions with an important historic bone carving tradition, e.g. southern Germany, Switzerland, Austria and South Tyrol, in which artisanal horn carving – carving objects from antlers – has also remained popular, animal bones are still used to make knife handles. Where animal bones are used today to make knife handles they are mostly cattle and reindeer bones. One major reason for the use of reindeer bones is that bone carving was popular for many centuries in Scandinavia, the main habitat of reindeer. Due to their similar structure and color, cattle and reindeer bones are often used to replace protected and prohibited ivory.

Since the beginning of the industrial age in the 19th century, the role of animal bones as a material for knife handles has diminished, but they are still used every now and again in the production of premium knives.