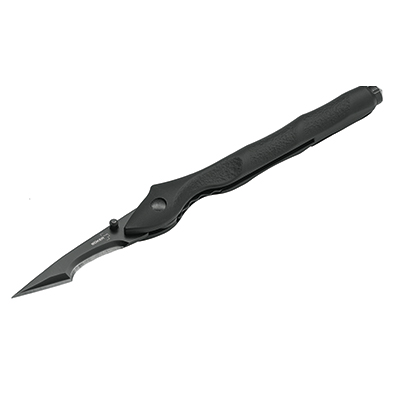 Survival knives have multiple uses and were originally developed for hunters and soldiers. They are designed to perform all classic knife tasks usually required for survival in the wild – cutting wood, skinning animals, serving as a hatchet or as a defensive weapon.

Most survival knives have a fixed blade with a length of ten to 20 centimeters and a massive handle Some survival knives (as they were in fashion in the 1980s) have a folding blade or hollow handle that can be used to store other tools such as a lighter or matches. Most survival knives are equipped with a clip point blade. The spine of this type of blade is slightly curved towards the point, which allows for precise and controlled stabbing and scoring of the material. The spine of the survival knife is either flat and unground or has a serrated edge. The precursors of today's survival knives were first introduced in the late 19th and early 20th century in the United States. Until that time, hunters and soldiers had used knives that were not significantly different from regular knives and could not perform multiple functions. The first survival knives were marketed as hunting knives and had a thick blade, crossguard and butt.

During World War II, soldiers in the US Army were first equipped with survival knives – the first to receive them were paratroopers because they had to survive and make their way behind enemy lines and needed light, versatile equipment. Today, survival knives are used by many armies around the world. They are also very popular with hunters, trekkers and hikers, who want to carry as little equipment as possible on long hikes. With the use of modern materials, today's survival knives have become much lighter than the older models.

Thanks to lights materials such as aluminum, polymers or hardened plastic, the weight of the handle scales in particular was significantly reduced. However, solid stainless steel handles are still very common.