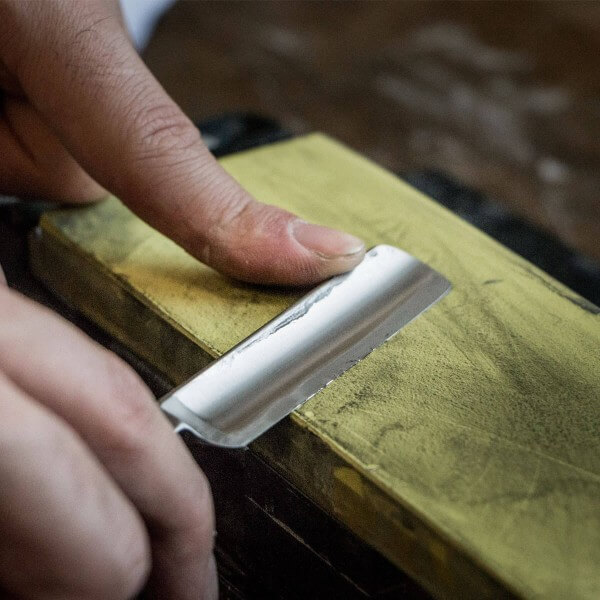 If you love your razor, you will want to be able to care for it yourself. This also includes sharpening it on the whetstone. The edge slowly becomes rounded due to regular stropping. This is intentional up to a certain point. However, at some point the angle of the edge becomes too steep and has to be ground flat again using a whetstone. Grinding also becomes necessary if the edge was damaged due to unintentional bumping, falls, or rust due to improper storage. We have compiled a small guideline for stones and sharpening.

A grinding material or abrasive is defined by two parameters. One parameter is grit, the other binding. The grit states how fine or coarse the structure of the stone is. The coarser the grit, the more steel the stone removes and the faster it works. In synthetic stones, the grit is determined in production by using corresponding sieves. In natural stones, the grit can only be stated approximately. The standard commercial measure is JIS (Japanese Industrial Standard). The European FEPA standard is almost exclusively used in industrial applications. The stones used for straight razors should be fine. Opinions vary on what exact grit should be used for synthetic stones for the final grind. For straight razors, we only use and deal with proven traditional natural stones whose grit correspond to 4000 to 10000 JIS. The binding states how strongly the grit, the actual grinding hard particles, are bound to each other. The grinding particles blunt over time and break out of the stone. This allows the stone to remain sharp over time. The softer the binding, the faster the stone works and the faster it wears. There are no standard industry and retail indicators for binding.

ATTENTION! Straight razors are never ground on dry stones. The natural stone "Belgian Brocken" (Fr.: Coticule) is used with water. Its very soft binding creates a fine grinding mud over which the blade glides. American Arkansas stones, also natural stones, are used exclusively with special grinding oil. These stones have a very hard binding and basically don’t wear at all. Similar to stropping, during grinding, first carefully place the blade spine and then the edge on the stone. However, in contrast to stropping, do not pull away from the edge but rather push into the edge. To do so, place three or four fingers on the spine of the blade and push the razor across the stone with light pressure in the direction of the edge. If the blade is positioned correctly, the water on the Belgian Brocken or the oil on the Arkansas stone forms a small wave in front of the edge. If the spine is decorated with gilding, etching, or an engraving, you should cover it with thin insulating tape to avoid grinding off the decoration. Once the straight razor has been sharpened sufficiently, strop it on a belt treated with paste, and finally on an untreated strop.