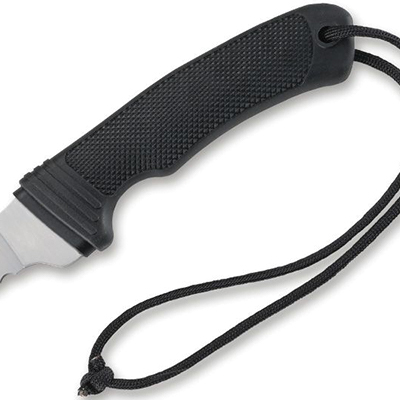 A lanyard is a cord or strap used to attach important objects such as knives in order to carry them around the neck or wrist. Keys are also often fastened to a lanyard.

The word lanyard comes from the French word "lanière". In France, such braided cords were first known in the 15th century, when French soldiers used them to secure small arms (knives, swords and pistols) or whistles to their uniforms to keep from losing them. These cords were mainly used by soldiers who did not need the secured objects on hand at all times, e.g. cavalry or naval officers. Since lanyards were included in the equipment of officers in these elite military branches, they were seen as particularly elegant and exclusive. Apart from simple, purpose-driven lanyards, soldiers also prized lanyards with decorations or identifying marks.

Many armies around the world still use lanyards to identify the members of certain units or decorated soldiers. Unadorned, practical lanyards used to secure important equipment and weapons are still popular today. They are also used to attach knives.