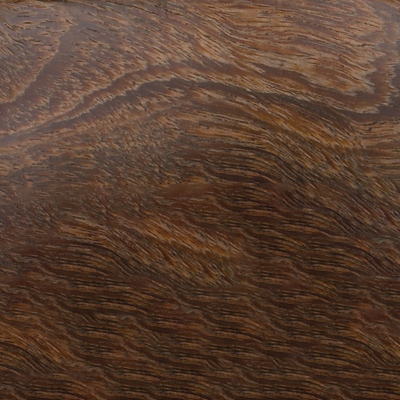 In knife manufacture, Guayacan ebony is used to make handle scales. It is one of the world's most precious woods. The wood is also known by its Latin name of "Lignum vitae" (wood of life).

Guayacan ebony is the wood of the Guaiacum, a genus of shrubs and trees with several species indigenous to the tropical regions of Central and South America – mainly in the Caribbean and on the northern coast of the South American continent. Guaiacum trees and shrubs of all species have a very hard, resinous wood. The species used to harvest Guayacan ebony is the so called roughbark lignum-vitae (Guaiacum officinale), which can grow up to twelve meters tall. Guayacan ebony is very hard and dense. According to the Janka hardness test, a wood testing method developed by the Austrian Gabriel Janka (1864-1932), Guayacan ebony is the world\'s hardest traded hardwood. It is also the densest traded wood in the world. Hardness generally indicates the mechanical resistance a material offers against mechanical penetration by another object. Density is the ratio between a material's mass and volume.

Due to its high density, Guayacan ebony is very heavy – so heavy, in fact, that it does not float in water. The wood is so hard that it is difficult to work with. The heartwood of Guayacan ebony used to make knife handles is yellow-brown to tan with fine dark veins. The surface of the wood is smooth with fine pores.

Due to its hardness and density, Guayacan ebony, discovered by Europeans, has been used in shipbuilding and for other objects that had to be particularly strong and resilient – e.g. pressure rollers, axle bearings and even bowling balls. Today, Guayacan ebony is used in small amounts in solid timber construction. This fine wood is rarely used to make handle scales, which are rather precious.