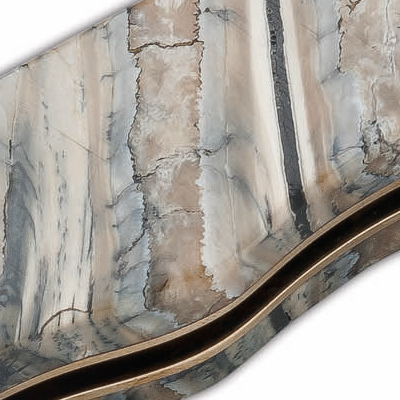 Mammoths were an elephant species that lived more than 5 million years ago and is now extinct. The last dwarf mammoths lived on Wrangel Island in northern Siberia about 4000 years ago. Particularly during the last glacial period (which began about 110,000 years ago and ended 10,000 years ago), mammoths lived in the tundras of Asia, Europe and North America, where they ate grass and protein-rich herbs. The most famous mammoth species, the woolly mammoth, reached a shoulder height of up to 3.7 meters and weighed between 5 and 8 tons, which is about the size of an elephant. In the Pleistocene (which began approximately 2.5 million years ago and ended around 9660 BCE), these huge mammals were hunted by humans. Mammoth remains – particularly the skeleton, tusks and teeth – were found mainly in northern Siberia. Every once in a while, a receding glacier reveals an intact and not yet decomposed mammoth body.

Handle scales are made from the teeth and the typical tusks of mammoths. The tusks of adult mammoths of different species could be up to two meters long, weighing about 100 kilograms. Many mammoth teeth used as a material have often been enclosed in ice for tens of thousands of years, which resulted in significant discolorations giving each tooth an individual look. The discolorations were caused by cracks in the outer layer of the tooth. These cracks allowed water and other substances to get into the tooth, where they formed mineral deposits that discolored the mammoth tooth.

The import and trade of teeth and tusks of mammoth species are not restricted in any way. Since the worldwide trade prohibition for ivory was established in 1989, mammoth teeth have been used as an ivory replacement.