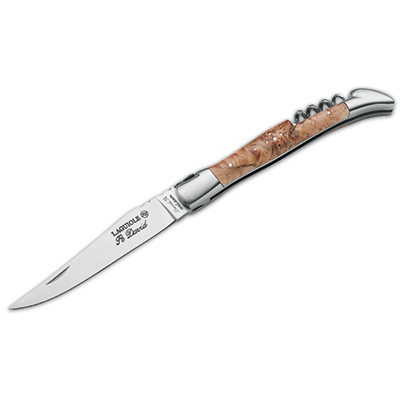 The sommelier knife was developed in 1882 by Carl F. A. Wienke, who registered a patent for a "waiter's knife" the following year. Today, this knife is commonly known as a sommelier knife (from the French "sommelier" meaning wine steward). Apart from a corkscrew, the knife also has a small blade and a lever. Corkscrew, knife and lever are foldable so that the sommelier knife is also a special kind of pocketknife – easy to carry in the pocket of a server uniform. In its unfolded state, the small knife is on one end, the lever on the other end of the knife handle, while the corkscrew stands out perpendicular to it. The knife handle is used to turn the corkscrew and pull the cork. First, the corkscrew is screwed into the cork which is then pulled out of the bottle.

A sommelier knife is used to open a wine bottle as follows: First, the capsule on the bottleneck is removed with the small blade. The blade is placed just underneath the end of the capsule and run once around the neck. The capsule can then be lifted off to expose the cork. The tip of the corkscrew is placed in the center of the cork and screwed in as far as possible. Lastly, the lever is placed on the bottleneck in order to pull out the cork with the help of the leverage effect. The lever is very important to ensure easy and safe cork removal, because it prevents the cork from breaking during this process.

Since this handy little device contains all tools necessary to open a wine bottle and ensures that the cork can be removed safely, the sommelier knife makes the work of servers much easier. Today, it is still used around the world in its original form, patented in 1883 in Germany, or variations thereof.