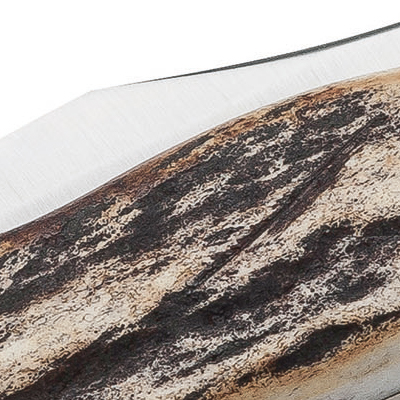 Stag is the name of the material derived from deer antlers, which is used to make high-quality knife handle scales.

Only male deer (Cervidae) grow antlers. Unlike horns, the appendages on the heads of horned animals like ibex, chamois or goats (Bovidae), antlers do not consist of horn but bone. Harts or stags use their antlers for display behavior during mating rituals and for fights with male rivals to assert their mating prerogative. Antlers also serve as a weapon against predators. Male deer grow new antlers every year and cast off the old. Antlers grow from two cone-shaped bones on the forehead of the deer (the so-called pedicles).

A short, hirsute skin layer called velvet delivers the blood supply. At the end of the growth phase, the blood supply ceases so that the antlers die off. The hart rubs off the dried up velvet on trees and shrubs. During this process, plant sap seeps into the antlers, giving the white bone material its dark color, which is also a characteristic of the stag harvested from the antlers.

In the fall season, a parting line appears between the pedicles and the antlers; soon after, the antlers break at this point and are cast off. Therefore, antlers used to harvest stag are not usually taken from hunted animals. For thousands of years, stag has been used to make many useful objects (arrows, hatchet blades and fishing hooks) as well as decorative items.

Today, stag is not just used for handle scales but also for traditional costume buttons. One special characteristic of handle scales made from stag is their individual shape. While wooden handle scales are mainly distinguished by pattern and color, stag handle scales have a very specific surface texture that makes each handle a one-of-a-kind piece.