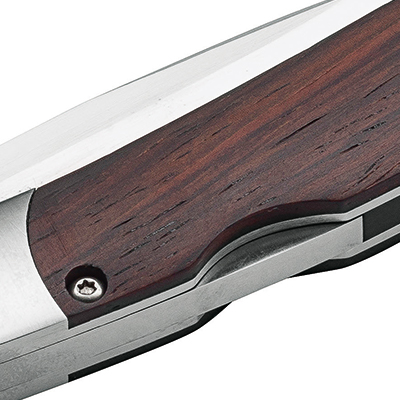 Backlock (or: Lockback or Back-Lock) is the mechanism in certain lockable pocketknives.

When the blade is open, the hook is lodged in the notch on the tang and locks it. The back end of the rocker is not fully covered by the handle. A small part of it on the back of the handle is left open to allow operation. A small spring, usually not visible from the outside, is located underneath the rocker. When it is triggered, it pushes the rocker back into its original position. The Lockback mechanism works as follows: When the blade is open, the hook slides into the notch on the blade tang and locks it.

When the exposed part of the rocker at the end of the handle is pressed, the hook is lifted out of the notch, releasing the lock so that the blade can be closed. When the knife is opened again, the rocker hook locks it automatically until it is released.